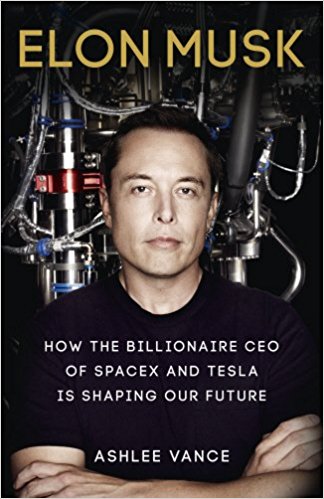 On my subjective scale between 0 and 10 Ashlee Vance’s book ranks gets 7 points. This book is one of many biography-like books i have read about successful and famous people like Gates and Jobs. Musk’s story and his past seems to be more complex and „shadowy“ than that of Steve Jobs and Bill Gates. At the same time it is more diverse and universal. Jobs and Gates both had a pretty straight forward story-line from a startup in parents garage to multi-billion dollar companies – little to no drawbacks along the way (except the ousting of Jobs). Elon musk on the other hand has a more diverse story-line. He had not just the one big hit with a startup company. He has gone further and founded/funded companies from totally diverse branches (zip2, PayPal, Tesla, SpaceX, SolarCity, Vicarious). Musk’s vision(s), thought(s) and companies seem to be from the future, not from the present.

„My Family fears that the Russians will assassinate me.“ – p.15

For normal readers the previous sentence might sound paranoid, but before Elon Musk, i read „Das Schwarzbuch des KGB“ or „The black book of KGB“ part 1 and 2. I have to admit, it would not surprise me if the current KGB, renamed to FSB, would have infiltrated the surroundings of Musk and the (IT-)infrastructure and employees in his companies.

„Musk had come to Russia filled with optimism […] and was now leaving exasperated and disappointed by human nature.“ – p.107

I read this book in the time when there was great political and emotional tension between western countries, Ukraine and Russia. This event in Musks life was congruent with the recent actions of the Russian government (Hacking/War/Annexation in Ukraine, Reuters: Food Crematoria, etc).

„By this time Musk had built up a decent network of contact in the space industry, and he brought the best of them together […]“ – p.101

This fact was especially interesting and important to me. I am naturally more introverted person and do develop software for the stock market or websites (2014-2016) while sitting alone in my room – i actually enjoyed it. And i loved the fact that you could earn money On-Line and build an audience (Website, Blog, Youtube Channel, Facebook group) completely on your own. I really don’t like the idea that my success is dependent on other people.

As i read Never eat Alone, i threw the book away (not literally) after a few chapters. I hated the fact that you had be in constant contact with hundreds of people and that your success  completely or partially depended on them.

Nonetheless, after reading books about successful figures like Musk, Jobs, Gates, etc. i came to realize that friends and connections are not only helpful in the world of corruption and politics, but also in the field of business and private life.

„If you put a number on the projector that does not make sense, he will spot it. He doesn’t miss details.“ – p.177

„He would trap an engineer in the SpaceX factory and set to work grilling him about a type of valve or specialized material. ‚I thought at first that he was challenging me to see if I knew my stuff‘, [said one of the early engineers]. ‚Then i realized he was trying to learn things. He wanted quiz you until he learned ninety percent of what you know.'“ – p.230

One of the most important key features of successful leaders/investors/entrepreneurs/ etc. : keep acquiring new knowledge and improving yourself (your character, your habits, your soft skills, etc.).

While i do exactly that at home or in the library reading book or watching online courses, Musk is lucky enough to gather his desired information directly from best people working at his companies.

„It bothers Musk […] that his kids won’t suffer like he did. He feels that the suffering helped to make him who he is and gave him extra reserves of strength and will.“ – p.357

This is a pattern i noticed before reading any books or articles about it. Someone who has gone through rough times in any domain and managed to survive and stay active, that person will be more likely to succeed when hard times arrive. That person is resilient and immune to this kind of stress and most important, that person has already experienced that kind of stress.

While the previous paragraph sounds pretty logical and intuitive, it is counterintuitive for us to make our kids suffer, so they become resilient and immune to stress. This is the part where we have to find the golden middle between giving our kids a beautiful childhood and preparing them for the adult world. Parents should think about that in advance and create a set of rules for the first 0-6 , 6-14 and 14-21 years.

„The rule is they [Musk’s children] have to read more than they play video games.“ – p.357

This is an example for a rule mentioned  in the previous quote. This is a perfect golden middle rule, where the kids get to play as much as they have read books. A perfectly fair ratio of 1:1. A good example of making the childhood of your child fun (play games) and at same time preparing your child for the adulthood (read books, acquire knowledge).

A philomath acquiring a detailed picture of this world. Ironically, i’m internalizing the details to see the big picture. The bigger the picture you truly understand, the more you realize how irrelevant everything is.

A workaholic optimizing his weekly struggles, which will lead to a happy, successful and an accomplished life.

A Software developer out of passion for creating systems and the need to support the first two paragraphs financially. Passionate to pass my knowledge along.

Believer of Chaos Theory and Determinism. In the long run, AI will take over. Drugs are like sports cars. If you have no self-discipline both will kill you.